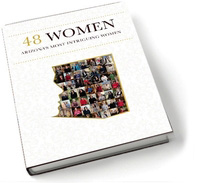 We're an Arizona Centennial Legacy initiative that recognizes (every 10 years) Arizona's most remarkable women making a remarkable impact in their communities, often with little fanfare. Their leadership accomplishments have transformed lives, built stronger communities and influenced and shaped Arizona and the nation.

Based in Scottsdale, 48 Arizona Women is a 10-year-old 501(c)(3) organization and a major partner of the Arizona Historical Society.

Nominations are solicited between December and February and honorees are announced in March. Further recognition occurs at a luncheon in the spring and a profile in a 48 Arizona Women coffee table book.

Current honorees include a former governor, federal judge, educators, an innovator who implemented a collaborative online platform to communicate during the Haiti disaster, a bull fighter who became a CEO,  an advocate for the treatment and cure of Niemann Pick Type C disease, a pastor who ministers to incarcerated women, a mayor who transformed a city, an ambassador who became Secretary of the Air Force and many dedicated philanthropists, volunteers, doctors, artists and entertainers in leadership positions across Arizona.

Please check back later in the year for more information about 2020 nominations. You may also contact 48 Arizona Women committee chair Connie Robinson at cbrobinson[ at ]cox.net or call 602-896-9000.

Legacy 2020 reunites 48 Arizona Women honorees in an initiative to renovate the Orientation Theater at the Arizona Heritage Center of the Arizona Historical Society in Tempe, and the development of ongoing learning programs and renowned speakers twice yearly to help primarily young women, girls and youth reach their best potential in communities statewide and across the nation.

The AHS is committed to directing and expanding women's and youth programming in Maricopa County and the 65 AHS-certified historical societies found in Arizona to connect people with the power of history. Launching the initiative this year will be even more significant as it is the 100th anniversary of the passage of the 19th Amendment.

Learn about the greatness of these women and their accomplishments through the Legacy Project Book, Arizona's 48 Most Intriguing Women.  You’ll be inspired by the courage, passion and tireless energy they’ve demonstrated in helping to create and shape the richness of Arizona.

HONOREE OF THE MONTH 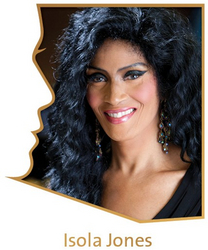