48 Women in the News

Come and Meet the 48 Most Intriguing Women of Arizona

Another of Arizona's Most Intriguing Women Stops By News 4 Tucson

Honored To Be Named One of Arizona's Most Intriguing Women

FROM A BULLFIGHTER TO A MUNICIPAL JUDGE, ARIZONA’S 48 MOST INTRIGUING WOMEN AID INDIVIDUALS, COMMUNITIES AND UNDERSERVED 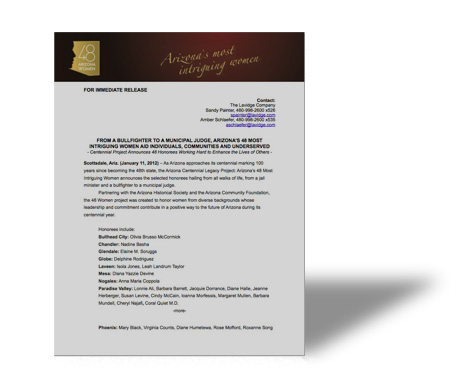 Women who shaped our state on CBS 5 News

Scottsdale, Ariz. (August 9, 2011)
Women from across Arizona who are currently making an impact on the state in a meaningful way are being sought as nominees for the Arizona Centennial Legacy Project: Arizona’s 48 Most Intriguing Women.

Partnering with the Arizona Historical Society and the Arizona Community Foundation, “48 Women” will honor professional and non-professional women from diverse backgrounds whose leadership and commitment are contributing in a positive way to the future of Arizona.

Open nominations are currently being accepted through Oct. 1 and Arizona residents are encouraged to nominate anyone they feel is worthy--from a next door neighbor to an elected official. Nominations can be completed online at www.48women.org. Paper nomination forms are available by calling 720-443-3660 or can be downloaded from the website.

“This program was created to raise awareness for the amazing work women are doing to improve and enhance the lives of Arizonans,” explained Connie Robinson, Chair of Arizona’s 48 Most Intriguing Women, along with Vice Chair, local businesswoman Joy Johnson. “While some nominees will be well-known, others will be working diligently but less publicly in their cities and towns.”

An official Arizona Centennial Legacy Project, the program will recognize 48 women as a salute to Arizona’s 100th year as the 48th state. Categories include: Education, Sports, Arts/Entertainment, Legislative/Judicial, Environmental, Cultural Development/Social Change, Business/Economics, Science/Medicine, Technology, Philanthropy, Military/Law Enforcement and General. Nominees must be Arizona residents or have roots in the state.

A 12-member governing board comprised of a diverse group of community leaders, public and private sector leaders and residents will evaluate nominees on several key factors: the impact that their leadership, accomplishments and dedication have had on the state and the nation; their influence as role models and visionaries; and their ability to relate to a wide range of people.

Honorees will be announced later this year or in early 2012 and featured in a 130-plus page coffee table book titled: Arizona’s 48 Most Intriguing Women, telling each woman’s story in words and photos. All honorees will be formally recognized in Spring 2012 during a 48 Women Centennial Luncheon as well as a VIP reception for the launch of the book. The book will be available for purchase throughout Arizona in early 2012.

“Our goals are to incorporate the book into the Arizona school curriculum as well as make it available in libraries around the state,” Robinson pointed out. “Kids need everyday role models who are bringing meaningful change to their lives and the neighborhoods in which they live.”

She added, “We also want to create awareness among Arizonans of the richness and uniqueness of the state’s history and the people who have contributed to it.”